KEEP MOVIN’ ON UP! 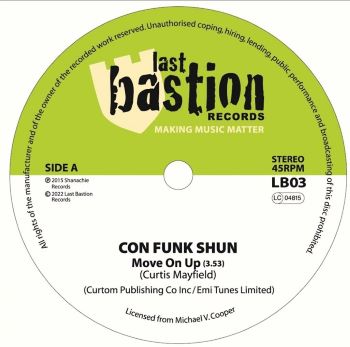 The putative A side is CON FUNK SHUN’S version of Curtis Mayfield’s ‘Move On Up’. The song is a proper soul anthem and it helped launch the gentle genius’ solo career. It never loses its impact and its message is as important today as it was in 1970. It’s been covered many times, of course (Paul Weller used to feature it in his live shows) and cult funk band Con  Funk Shun cut their version in 2014 at The Soundform Studios, California but despite the band’s appeal and status (11 chart albums (one Platinum, four Gold) and 20 hit singles (eight top 10 RnB chart, one No.1) in the US) it was never released.  (A slightly different, album length  version  appeared the band’s 2015 ‘More Than Love’ cd).

Word of mouth has made the Last Bastion  version of ‘Move On Up’ something of a talking point amongst soul collectors, so, step in Last Bastion who are, at last, making it easily available. Listening in, you can hear why it’s so appealing. Like all the best cover versions, it offers something different to the original. You see the Con Funk Shun team (now Michael Cooper, Felton Pilate and Rev. Karl Fuller) take Curtis’ song down to  New Orleans and the Louisiana swamps giving the familiar song a Zyedeco beat and a quirky  Cajun accordion/squeeze box backing alongside  a  formidable horn section. Sounds odd? Well, yes, but it really works. It’s unique and infectious and allows  Curtis’ message to shine through as brightly as ever!

This new release’s B side is very different – JAY CEE’S  ‘I’ve Been Thinking’. Mr Cee, it seems was/is a resident DJ at York’s’ Waterfront Blues and Soul Club which was/is something of a mod/Northern soul enclave and he cut ‘I’ve Been Thinking’ as a paean to that scene and early rough mixes and acetates have given the recording a hefty underground “Nu Soul” reputation. So, big thumbs up to Last Bastion for getting it out there!