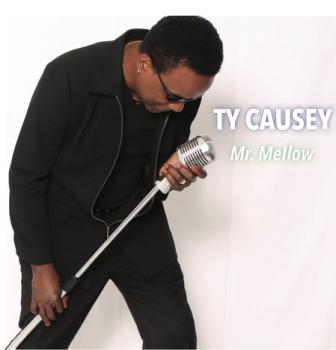 Last month we were all quite taken by a lovely single, ‘Shake & Dance’ from US soul man TY CAUSEY. We shouldn’t have been surprised by the quality of the tune and performance ‘cos Mr Causey had impressed a year or so back with his album ‘Tyangles’. We thought, then, that he was a soul newcomer but research revealed quite the opposite. He’d actually started back in the 90s, singing with Najee before winning plenty of friends with his own ‘N-tysing’ album in 2004.

Whatever, ‘Shake & Dance’ won plenty of support and the good news is the parent album, ‘Mr Mellow’ has just gained release and it’s packed with plenty of tunes every bit as good as that album-heralding single.

Key cut on the album is the gorgeous ‘Turn It Up (That’s My Jam)’ – a gentle swayer on which Ty name checks and gives respect to his soul heroes… people like Marvin Gaye, Donny Hathaway, Maze, Luther Vandross, Stevie Wonder, The Temptations and many more. In the UK I know we’re suckers for these “litany” songs; they evoke so many great memories and Mr. C delivers it perfectly.

Cleary it shows his influences and they’re equally obvious on other album gems like the head-nodding ‘Feelin’ That Vibe’, the insinuating title track, the jazzy ‘Nobody Like You’ and the balladic ‘Can’t Stop’. In truth, though, dip in anywhere here and hear classy, sophisticated modern soul … little wonder that Stateside Ty Causey is always billed as “Mr Consistent”.