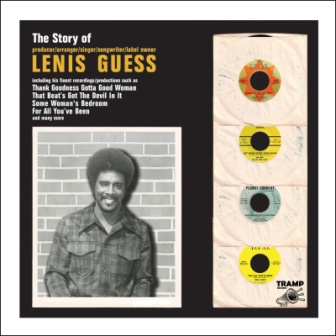 LENIS GUESS is the archetypical Northern soul legend. Almost unknown in the soul mainstream, odd, rare records from his archive have become Northern classics even though little is actually known about Mr Guess. Well, all that is about to change with the release of a splendid 25 tracker from Germany’s Tramp Records which catalogues a remarkable and varied career.

‘The Story Of Lenis Guess’ is released on July 7th and gives you all you need to know about the singer, born in Virginia back in February 1940. We’re told that Lenis’ first musical experiences were with a group called The Blue Beards, but in 1966 he launched a solo career with Frank Guida’s SPQR label. The first single ‘Working For My Baby’/’Just Ask Me’ was the one that sealed Lenis Guess’s Northern reputation.

In 1969 Lenis formed his own label DPG records which recorded local Norfolk artists as well as being an outlet for his own stuff. When the label folded, Guess set up his own studio with engineer Dorsey Brockington and they put together a spirited, youthful house band, Raw Soul. Most of the artists who used the studio were local though odd sides were licensed to labels like Polydor and Brunswick. Lenis eventually relocated to New York, where he opened a new studio which he still runs today.

Tramp Records’ ‘The Story Of Lenis Guess’ chronicles the singer/producer’s work in Norfolk and includes both sides of that legendary Northern 45 along with material from artists like Barbara Stant, Shirley Johnson, Alvin Delk, Terry Sinclair and Page One who offer a remarkably soulful ‘Thank Goodness Gotta Good Woman’.