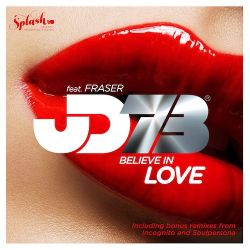 Listeners to Jazz FM over the past few days will have been enjoying a great new tune called ‘Believe In Love’ from JD 73 (NO! not WD 40… JD 73).

The brains behind the tune is Dan Goldman (‘Jazz Doctor 73’).Young Dan is a classically trained, producer, keyboardist and remixer from way up there in Leeds. He’s collaborated with many well-known acts including Morcheeba and Leon Ware and his remix duties have seen him tweak stuff by the likes of Nightmares On Wax, Incognito, Richard Earnshaw, Cool Million, The New Mastersounds and Bill Laurance (Snarky Puppy).

JD’s first album came out in 2008, followed by ‘Pure Gold’ in 2010 on Joey Negro’s Z Records and ‘Believe In Love’ is taken from Dan’s upcoming long player ‘Make Your Move’ on Splash Music. The cut is a delicious, little summer groove with punchy horns and an insidious Moog bass line. The smooth vocals come courtesy of Sheffield’s Fraser Jowle and as you can imagine the cut comes in a number of mixes. The version currently winning favour is the Incognito mix. Dan has been a long-time collaborator with Mr. Maunick and, dependable as ever, Bluey brings out the best in the tune. Soulpersonna offer another mix while the “Re-Twist” moves things up into soulful house territory (though there’s a whiff of Jamiroquai about it too)