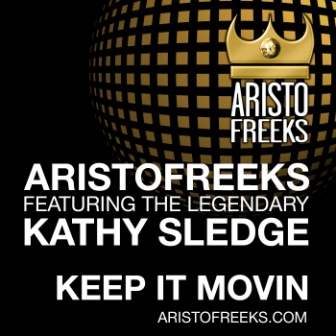 Remember SISTER SLEDGE? Sure you do. Tunes like ‘Mama Never Told Me’ , ‘We Are Family’, ‘He’s The Greatest Dancer’ and ‘Love Don’t Go Thru Changes’ are accepted as genre classics while in the 90s lead voice KATHY SLEDGE kept the feeling with her Epic album, ‘Heart’.

Kathy is currently signed to Pacific Electronic Music – owned by ex Atlantic exec Jerry Greenberg – and is working on lots of new stuff. In the meantime, though, she’s just surfaced as featured vocalist on a classy slice of soulful house from a team going out as ARISTOFREEKS.

Aristofreeks is an Ibiza-based DJ/producer/remix duo – Max Martire and Shantti Matkin and their mission statement is to re-inject some disco magic into modern house and what better artist to help them out than Kathy Sledge (we’re told they’re also lining up Linda Clifford, Martha Wash and Norma Jean!)

The Aristofreeks/Kathy Sledge collaboration is called ‘Keep It Movin” and, as you can imagine, the energized dancer comes in a plethora of remixes with the tweak from Eric Kupper topping the pile. The tune itself is a proper little bouncer – aimed shamelessly at the club crowd – but Kathy’s in great form and all augers well for what she’s working on with Pacific Electronic.