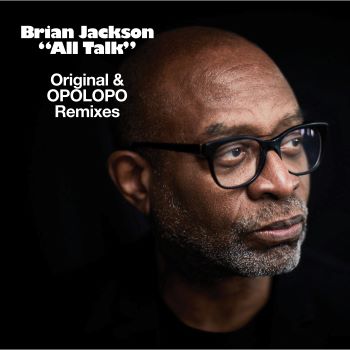 Veteran songwriter and musician BRIAN JACKSON needs no introduction in these hallowed pages. He is of course best known for his albums as co-artist/producer with Gil Scott-Heron in the 1970s but he’s also worked with people like Will Downing, Gwen Guthrie, Kool and the Gang, Roy Ayers, Alabama 3 and even Sean Ono Lennon.

Oddly for such a talent, Jackson’s solo output is sporadic. In fact we think his last solo effort was something like 20 years ago, so the discerning serious soul crowd will be delighted to learn that the Brooklyn born Jackson is gearing up to release a new solo set – ‘This Is Brian Jackson’, due May 2022 via bbe. The good news, however, is that you don’t have to wait too long to enjoy a taster as the label unleashes the lead single on February 18th – it’s a hugely, percussive, rhythmic, insistent outing called ‘All Talk’. With a message in the music (“Ours is ours – Not yours to give us”) and a jazzy flute trailing the vocal lines you won’t be surprised to learn that there’s a distinct flavour of Gil Scott-Heron about proceedings, though this ‘All Talk’ is just a tad smoother and a little more polished though (importantly!) never bland!

‘All Talk’ (indeed the whole album) was produced by Phenomenal Handclap Band founder Daniel Collás. Explaining the soundscape, Jackson says: “I had mentioned to Daniel that I had begun work on a solo project around the time that Gil and I were recording ‘Bridges’ in 1976. I even had a few unfinished tracks. The seed of Daniel’s concept centred around the question: ‘what would a Brian Jackson album sound like if the 21st century Brian were to complete that 1976 album today?’”

‘All Talk’ is a wonderful “comeback” for BJ and alongside the original mix there is a pair of remixes from Swedish production wizard OPOLOPO, who provides a 21st century futuristic boogie version and a tougher, percussion-led mix aimed straight at  the dancers. The single package also offers the usual instrumentals which offer considerable soulful house charm in their own right!

The album ‘This Is Brian Jackson’ is scheduled for release on vinyl, CD and digital formats, May 6th 2022. The ‘All Talk’ single is released February 18th via bbe. Recommended!