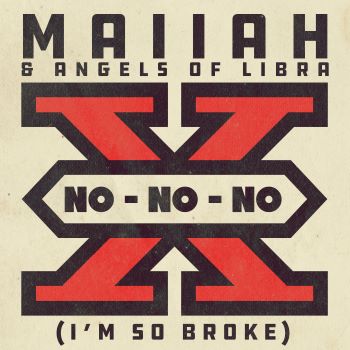 THE ANGELS OF LIBRA are a 10 piece soul outfit from Hamburg “pledged to making music the old fashioned way”.  So far this year we’ve featured two of their singles… the aptly named ‘Angel Of Libra’ and ‘All Your Love’, both featuring vocals from Irish singer, NATHAN JOHNSON.

For their latest single the Librans have a new vocalist out front… German songstress MAIIAH. The band’s people tell us that the tune emerged from a session in Denmark where the band were cutting  instrumentals  with producer, Dennis Rux. One of the cuts was an energized, Northern soul paced item that the band and producer thought was crying out for a vocal. Thus Ms Maiiah was brought in and so ‘No No No’ was born.

The tune is a frenzied, full frontal attack with a vaguely familiar guitar riff running through it (maybe, it’s based on an old Northern classic – sure sound like it!). Maiiah’s feisty vocal  totally  matches the intensity of the track!

Maiiah & Angels of Libra: : ‘No No No (I’m So Broke’) out now via Waterfall Records