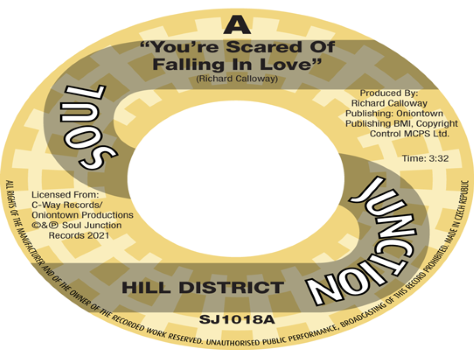 Proper soul buffs will know something about Calloway. He hailed from Uniontown P.A. which  was known affectionately by the local black community as ‘Oniontown’ the name which Calloway adopted for his first music publishing company which later morphed into C-Way Productions and label. And it’s the C-Way label that’s the source of both sides of this new Soul Junction 45.

The disc’s A side features THE HILL DISTRICT with a smooth, catchy groove, ‘You’re Scared Of Falling In Love’. The group were seasoned musicians marshaled by bassist Walter “Sonny” Hughes and the Soul Junction people think that ‘You’re Scared Of Falling In Love’ was their only recording under that name. The group consisted of Richard Hughes (Lead Guitar), Anthony Law (Keyboards), William M. Standard Jr (Piano), Mark Smith (Drums), Daniel S. Lee Jr (Lead Vocals) and, of course, Sonny Hughes and they took their name from a grouping of African American neighbourhoods in the city of Pittsburgh. Released on C-Way Records in 1974, ‘You’re Scared Of Falling In Love’, sadly, meant nothing. Local radio spinners (the first hope for any kind of success) refused to play it because of poor quality mastering (a situation totally rectified by the Soul Junction people for the new issue!) and the group went their separate ways. Of course, the few original copies of the 45 are now in demand (even with the poor mastering!), so, here, Soul Junction have done us all a favour by reissuing it with quality remastering. Grab a listen and you’ll enjoy some fine, jaunty 70s soul.

The B side to this new SJ release offers a different soul flavour – a searing, old school ballad from RICHIE MERRETT, 1973’s ‘You’ll Aways Have Yesterday Standing By’. Richie Merrett (sometimes he spelt his name Meritt) came from Pittsburgh and had previously worked with a group called the Electrons – a blue-eyed Philly soul outfit who recorded two excellent cover versions of ‘Ain’t No Big Thing’ b/w ‘In The Midnight Hour’ for the local Shock label in 1967 (later to be picked up by the Date label). Leads singer on those collectable cuts was Steve Sopko who was replaced by Merrett/ Meritt. And it was Merrett/ Meritt who fronted the group’s version of Bobby Bland’s ‘Turn On Your Love Light’. Impressed by that and subsequent live shows, Calloway got Richie into the studio to cut a single, ‘You’ll Aways Have Yesterday Standing By’.

As with the Hill District release, Richie’s record failed to impress but it’s now hugely desirable especially on the Lowrider scene. For the record, Richie Merrett/ Meritt went on to work with groups like The Crests, the Drifters, The Clovers, the Marcels, and This Is It (which coincidentally also featured the aforementioned Sonny and Richard Hughes, and William “Billy” Standard from The Hill District!) He also continued to work solo and now lives down in Florida where he works the cruise ship circuit.

Interestingly a cover ‘You’ll Always Have Yesterday Standing By’ was later produced by Walt Maddox under the shortened title of ‘Yesterday Standing By’ on his group These Gents on the Carnegie P.A based Western World Music label and a further release on the Soulvation Army label…another collectable item.