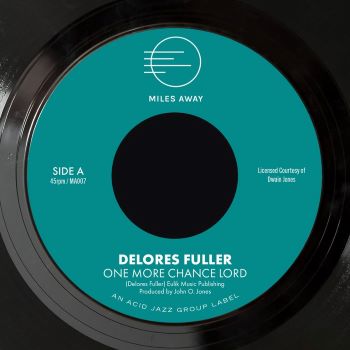 Latest release on Acid Jazz subsidiary Miles Away Records pairs two old school, soul/gospel cuts from DELORES FULLER. Ms Fuller is a veteran gospel singer probably best known for her 1989 album, ‘God’s Love’ and that album , released on Intro Records, is the source of both songs on the single.

The A side is the building, driving ‘One More Chance Lord’ that, despite (or indeed, because of ) it’s Gospel credentials, is sure to please lovers of no frills, modern soul. The B side to the single is a much more intense affair – ‘My Greatest Desire’. This piano-led affair is a throwback to the days of the store front churches and fire and brimstone testifying.

Remastered and available on the teal green label of Miles Away. This single is limited to 500 pressings and is set for release on 21st May.