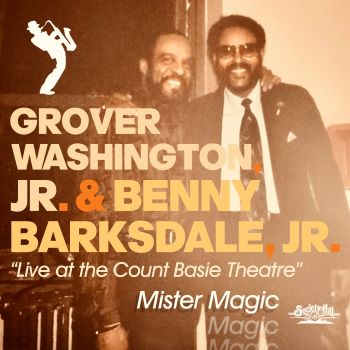 BENNY BARKSDALE JR. is a Baltimore saxophonist who’s been on the soul and jazz scene for quite a time. For many years he was a mainstay of the Dells road band (no relation to Chuck Barksdale, by the way) and he played with the Nite Liters (it’s his solo on ’K-Gee’). Benny’s worked with plenty of soul and jazz greats too – including Alicia Keys, Evelyn “Champagne” King, Gloria Gaynor, Phyllis Hyman, Jimmy McGriff, The Crests, The Manhattans and Gary U.S. Bonds. More recently he’s worked with Philadelphia label, Society Hill Records and that’s the source of his latest offering – a first time, official release of a duet he recorded back in 1992 with one of his long time heroes… Grover Washington Jr.

It seems that in that year the late sax star was playing a string of East Coast concerts and , in a forlorn hope, Benny got in touch and asked if he could meet up with him. Graciously, Washington agreed, and the pair hit it off leading to Grover asking Benny to join him on stage at the Count Basie Theatre, Red Bank New Jersey for a rendition of the classic ‘Mister Magic’.

Now years later, the track wins release with the tilte ‘Mister Magic – Live at the Count Basie Theatre’ and Barksdale’s solo is a revelation as is Grover Washington’s warm welcome when bringing his protégé on stage.

The new/old magic Barksdale/Washington version of ‘Mister Magic’ is released on April 2nd.