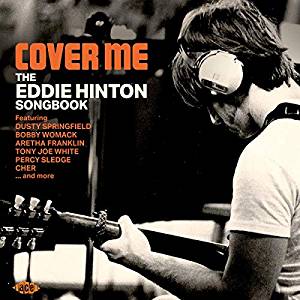 My guess is that not many will have heard the name EDDIE HINTON, but many will have heard his songs, his guitar playing and, occasionally, his voice. You see Jacksonville-born Eddie was a key creator of the classic Southern soul sound. After relocating to Alabama,  Eddie soon became an in-demand session guitarist and a member of the Muscle Shoals Rhythm Section, “the Swampers”. Amongst the artists who profited from his input are Wilson Pickett, Arthur Conley, Aretha Franklin, Joe Tex, Solomon Burke, Percy Sledge, The Staple Singers, The Dells, Paul Kelly, Johnny Taylor, Elvis Presley, The Box Tops, R. B. Greaves, Boz Scaggs, Evie Sands, Looking Glass, Toots Hibbert and Otis Redding. He made occasional recordings in his own right and also penned plenty of great tunes for others – the most famous, maybe, being ‘Breakfast In Bed’.

And it’s the Dusty Springfield version of that song that kicks of this 24 track Ace Records homage to Eddie Hinton, the songwriter. Eddie penned the song with Donnie Fritts and amongst the other Fritts’ collaborations here is what can best be described as a salute to obesity… ‘300 Pounds Of Hongry’… a version by the late Tony Joe White.

Amongst the other featured artists are Oscar Toney Jr, Bobby Womack, Aretha, Lou Johnson, Bonnie Bramlett, Percy Sledge, the Sweet Inspirations , Candi Staton and the UK’s own Lulu. Her input is the sweet ballad, ‘Where’s Eddie’ which she cut on her Muscle Shoals recorded ‘New Routes” album. It’s a far cry from ‘Boom Bang A Bang’! Eddie Hinton himself is at the mic for one included track…a demo of ‘It’s All Wrong, But It’s Alright’ – later recorded by both Laura Lee and Percy Sledge.

The copious sleeve notes explain why Eddie didn’t record more and why he’s not that well-known outside Southern soul circles. His life style was chaotic and he was plagued by mental illness and addiction problems. He died aged just 51 in 1995. Here you can enjoy his legacy.