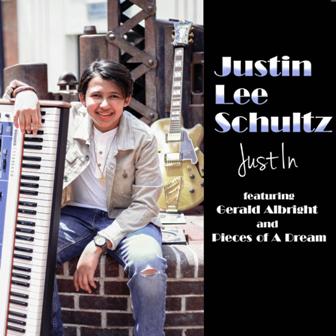 Born in Johannesburg, South Africa and now based in Durham, North Carolina, young (he’s just 13) multi instrumentalist JUSTIN LEE SCHULTZ is being hailed as a child prodigy. “This kid is something special”, says Quincy Jones while Robert Glasper opines, “Justin is an older man in a little boys body!! It’s so great to see somebody so young have such a vast love of ALL kinds of music!! And to see his work ethic and his drive is so inspiring! He sounds amazing and he’s only getting better!”

Well, as they say, the proof of the pudding and all that – so we’ll need to wait till November when young Justin releases his debut album on Shanachie Records to properly make up our minds. The album, by the way, is titled ‘Gruv Kid’ but those nice people at Shanachie have just released a single on young Mr S as a taster. Appropriately, it’s called ‘Just In’ (geddit?) and it’s a classy slab of smooth jazz. Not sure what the young fella’s playing on this one but helping him out are sax man Gerald Albright and the Pieces of a Dream crew. Indeed the whole thing has a vibe reminiscent of the great days of Pieces of a Dream… no bad thing!

We’re told that alongside the Dream team and Gerald Albright, the upcoming album also features Bob James, Harvey Mason, Najee and Jonathan Butler. Sounds good to me and we’ll bring you a full review just as soon as we have the music.