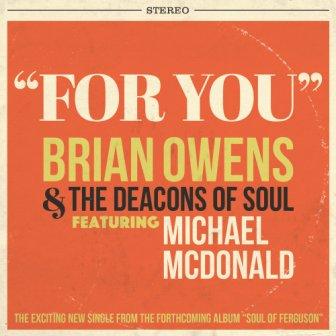 BRIAN OWENS is a soul singer who grew up in Ferguson, Missouri. He began his music career singing in the services when he fronted an Air Force band, the Sidewinders. YOUTUBE and TV success followed and now fronting his own band, THE DEACONS OF SOUL, he’s preparing to launch his debut long player, ‘The Soul of Ferguson’.

The set’s lead single is a busy, bustling 70’s flavoured ‘For You’. Written and produced by Owens, the mini, everything happening epic is winning attention for all kinds of reasons. First off it’s a big, big production. Then there’s a whiff of retro about it… some have made comparisons to Marvin Gaye (hardly surprising; Owens has spent some time working in Gaye tributes). What is securing air play and media attention, though, seems to be the presence of a certain Michael McDonald on the track. The five time Grammy winner shares the lead vocal with Owens who says: “Michael took the song to a whole other level. For me, it’s not just a song anymore. It’s what our friendship represents. It’s about what’s possible. It’s about what’s needed, not only racially but inter-generationally. I couldn’t survive without people in my life in my life like Michael, who are further along than I am and who are willing to invest their success in me. That’s the highest compliment you can be paid.”

For his part, McDonald, who also hails from Ferguson, Missouri. says: “I find great inspiration in getting to collaborate with amazing young talent. This young man is from my hometown of Ferguson Mo. Obviously I’m not the only one who thinks he’s world class. His collaborations are becoming many and it’s just the beginning”.