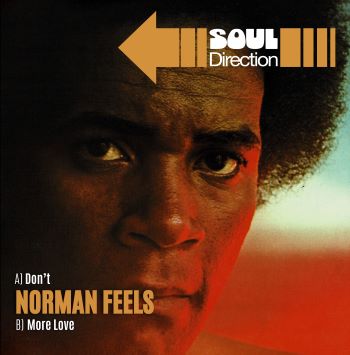 Little is known about Norman (real name Norman Solomon) other than he released two albums for Sunshine Records – a self-titled set in 1973 and ‘Where Or When’ the year later. Both albums were arranged by the legendary David Van De Pitte! However, the two tracks that make up the new Soul Direction 45 aren’t from either those albums. The A side is an energized take on the psych-soul sound pioneered by people like Norman Whitfield…heavy bass lines, wah-wah guitars et al.  Norman’s song is simply called ‘Don’t’ and the Soul Direction people think it was recorded in Detroit in 1972 and though a version of ‘Don’t’ appeared on Norman’s first album, it’s not this particular, very punchy mix!

The other song on the release offers a different vibe. ‘More Love’ is a sweet and stately ballad carrying a plea for universal love. The cut boasts a full-on and quite lovely 70s production and good ‘ole Norm croons sweetly with pleasing harmonies . This is another 1972 Detroit recording and this is its first ever release. It certainly deserves its airing!

Soul Direction singles always sell out quickly and though we don’t have an actual  release date , you can learn more @ www.soul-direction.co.uk