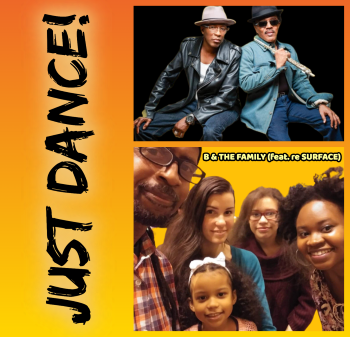 B & THE FAMILY is a proper family band. They’re led by  husband and wife team, Brian K. Morgan (guitarist with the Sugarhill Gang and Kashif) and Katie Goulet who have drafted in kids Tayler  on drums and Willa and Genevieve  on keyboards. We fist heard  ‘em a few years back with an optimistic, disco slanted, Chic flavoured, groove heavy ‘A Good Time’.

The Family now return with another dance item – ‘Just Dance’ on which they’re aided and abetted by the new look Surface team (David Pic Conley and John Feva.) who, of course now go out as RE-SURFACE. Between them all they create an 80s flavoured dance item, hardly surprising given the pedigree of the main players … and the title’s a bit of a giveaway! It’s available right now from your portal of choice!