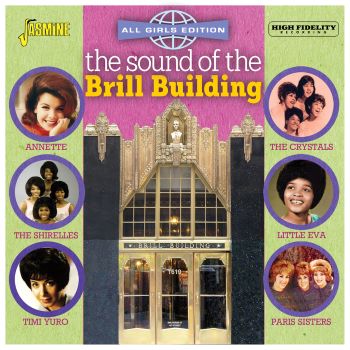 Latest release from budget reissue label, JASMINE is a wonderful tribute to the music that came out of New York’s famed Brill Building in the early 60s. Any music collector worth his/her salt will know that the art deco edifice at 1619 Broadway was, for many years, the epicentre of the US popular music scene. The building was named for the Brill Brothers who ran a clothing  store on the ground floor but as the 30s Depression kicked in the company began to rent out space  and many of the takers were music publishing companies many of whom employed their own in-house song writers, producers and arrangers. By 1962 it was estimated that there were 165 music related business operating in the Brill and many of the people who worked for those companies have become pop culture icons – Carole King, Gerry Goffin , Jerry Leiber, Mike Stoller, Doc Pomus, Mort Shuman, Burt Bacharach, Hal David and Neil Sedaka amongst them!

This new Jasmine compilation – THE SOUND OF THE BRILL BUILDING – offers a very generous 32 tracks that all began life in the Brill. The other connecting thread is that all the artists are female.

The album includes plenty of embryonic soul – including Dionne Warwick’s still mesmerising ‘Don’t Make Me Over’ and the Shirelles’ ‘What A Sweet Thing That Was’ – a track that proves they were real contenders sadly overshadowed by their Motown contemporaries. No wonder John Lennon was a huge fan!

Being the early 60s you can expect plenty of tracks that tell tales of teenage romance, often angst laced – cuts like Connie Stevens’ Why’d You Wanna Make Me Cry’ and Tina Robin’s ‘Dear Mr DJ’ (both early Goffin-King songs). There are also plenty of novelty songs like Eydie Gorme’s ‘Blame It On The Bossa Nova’ (penned by the celebrated Mann/Weill pairing by the way) and the once fashionable “answer” songs. So, for instance Damita Jo’s ‘I’ll Save The Last Dance For You’ is a response to the Drifters’ classic while Sammi Lynn’s ‘You Should Know I’m Still Your Baby’ is a reply to the Bobby Vee smash, ‘Take Good Care of My Baby’ – another Goffin/King song. And speaking of Ms King one of the album highlights is her demo version of ‘Crying In The Rain’ – a big hit of course for the Everly Brothers!

THE SOUND OF THE BRILL BUILDING (All Girls Edition) is out now via Jasmine and we’re promised a male version very soon. We’re confident that that one will be every bit as varied and entertaining as this one!