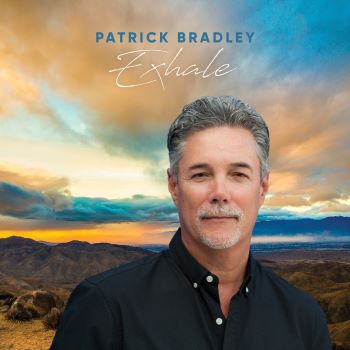 ‘Exhale’ is the latest album from American jazz keyboardist, PATRICK BRADLEY and it’s the follow up to his 2017 ‘Intangible’ collection. Bradley has always believed in musical messages and with ‘Intangible’ he wanted listeners to look beyond the physical and find hope, faith and real love. Right now, those are three commodities that we all need by the sack full and with ‘Exhale’, Bradley hopes that the trajectory which ‘Intangible’ started continues.  Though the music for the new 11 tracker was sketched out before the pandemic hit, as 2020 evolved, Bradley became more and more aware that he wanted to craft an album that might help expel the fear, worry and division gripping his homeland – and by extension the world community. So, he sees ‘Exhale’ as a musical release from the difficulties and tensions of 2020 and that’s exactly what the album’s gentle and soothing title track sets out to do. Therapists will tell you that controlled breathing is an essential relaxation tool and here, the ‘Exhale’ tune is the musical equivalent of those deep breaths and longer exhalations.

There’s plenty more of the same soothing, laid back ambience throughout the album. With titles like ‘Song Of May’, ’Sip’n The Breeze’ and ‘Lighthouse’ you probably could guess the mood though elsewhere there are more sprightly moments like ‘Reinvention’ and ‘Cat Man Blues’ on which guest Rick Braun’s horn work is a delight. Amongst the other players are Darren Rahn and Jeff Lorber who also share production duties.

Bradley says: “This is a special project. I’m hoping people really get the sense of hope and peace that’s in this thing. We all need it. We’ve all had a hard year – whether it’s Covid fatigue, political fatigue or whatever. I’m hoping people will listen to the album and it will give them some sort of release, a sense of hope, and that somehow it’s inspirational”. So, go on – just ‘Exhale’. Out now via Song Factory Records.