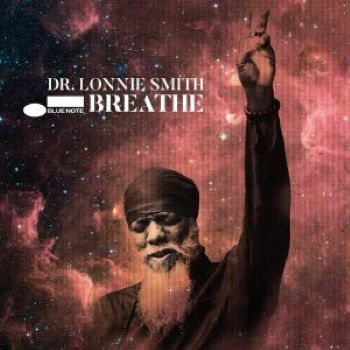 Hammond veteran LONNIE LISTON SMITH returns to the fray with the upcoming release of a new album simply called ‘Breathe’. The set’s an 8 tracker with 6 of the selections having been recorded live at New York’s Jazz Standard in 2017 as part of the organist’s 75th birthday celebrations.  The two “non-live” cuts will prove to be the LP’s USP – you see they are vocals featuring rock icon Iggy Pop.

It sounds an odd pairing, but it works. The collaborations – covers of Timmy Thomas’ ‘Why Can’t We Live Together’ and Donovan’s ‘Sunshine Superman’ top and tail the album and both add real variety and intrigue to the collection. The Thomas tune features, of course, those familiar organ fills, and Smith makes the most of the opportunities that they offer. ‘Sunshine Superman’ lends itself remarkably well to a Hammond treatment while on both, Mr Osterberg delivers a laid back, laconic vocal that perfectly suits the setting.

The other six tracks feature Smith’s usual team of guitarist Jonathan Kreisberg and drummer Johnathan Blake, as well as an expanded septet featuring John Ellis on tenor saxophone, Jason Marshall on baritone saxophone, Sean Jones on trumpet, and Robin Eubanks on trombone, plus guest vocalist Alicia Olatuja who stars on the mournful ‘Pilgrimage’.

Produced by Don Was, ‘Breathe’ is Smith’s third new Blue Note album since his 2016 return to the label where he first made a name for himself in the late-1960s. Smith says: “Blue Note is like family. It’s like I never left. Everybody is great to work with. They give me the opportunity to play my life, to tell my story.”