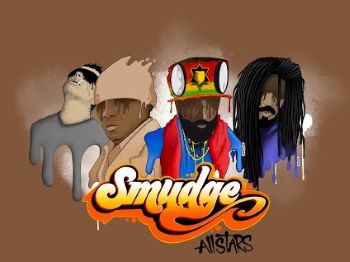 Jazz collectors will know the name of British drummer John Stevens. He died in 1994 but his son RICHIE STEVENS has carried on championing musical expression in various forms. He’s already worked with people like Joss Stone, Boy George, Damon Albarn and reggae star Horace Andy. Right now, though, he’s fronting a new, experimental collective …. SMUDGE ALL STARS. “All Stars”? Well, yes… I mean amongst the contributors to the project are Pee Wee Ellis, Camelle Hinds, Fred Wesley, Omar and a certain George Clinton!

The Smudge All Stars debuted earlier this year with the well-received single, ‘Our Lives’ which featured reggae and dub legends Lee ‘Scratch’ Perry and Dennis Bovell and married their reggae with a vintage, psychedelic funk. Now the ensemble has released a very different follow up… ‘Brutal Funk’ and never has a tune been more appropriately titled; it’s brutal and, yes, funky! It’s been crafted by Stevens and Jamiroquai member DJ D-Zire with vocals from British soul singer Mary Pearce.

‘Brutal Funk’ and ‘Our Lives’ are both focus cuts on the band’s eponymous debut album which is due for release on Pegdoll Records on November 27th. Stevens says of ‘Brutal Funk’: “Whilst chatting with Dr Funkenstein himself, it seemed relevant to ask, ‘what is the funk?’ seeing as I would finally get a reliable answer. The Dr said ‘when you’ve given all you’ve got, and you reach really deep to find the very last drop……. that’s the funk!’ So ‘Brutal Funk’ is the intro to the journey. A celebration of that most elusive genre – FUNK!”

Appropriately, ‘Brutal Funk’ is the opening track on the long player and as Mr S says, the journey starts right there!