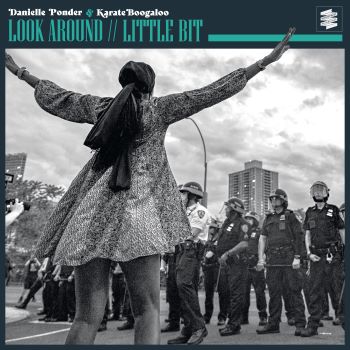 In spring New York singer and activist DANIELLE PONDER teamed up with Aussie band KARATE BOOGALOO for in intriguing ‘Look Around’. The sombre tune was originally conceived to focus on the problems caused by Australia’s bush fires, but the musicians expanded its remit to bring in the pandemic and the Black Lives Matter campaign. It was also nice that some of sales profits from the haunting reflection on the times we live in went to the Equal Justice Initiative in the USA and Warriors of the Aboriginal Resistance in Australia.

‘Look Around’ is now being reissued; this time as the B side to a new Ponder/Karate Boogaloo single with the A side being an equally thought provoking, soulful ballad, ‘Little Bit’. The message is plain; “a little bit of love will make it alright”.

‘Little Bit’/ ‘Look Around’ will be available on 7” vinyl from October 9th via Hope Street Recordings.