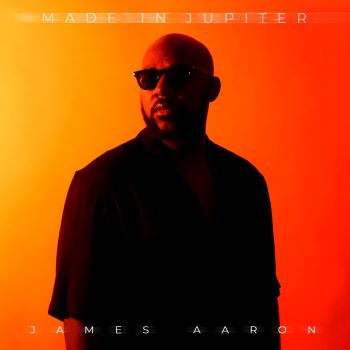 JAMES AARON is a UK soul man with a gospel background. He was a key member of The Kingdom Choir. You may recall they sang at the wedding of Prince Harry, and someone called Megan! He says: “I became a Christian at age 18 and have been one till present. Being in church from 18 years old also has a massive part to play in my musical journey.”

A secular musical career followed – which got James work on the session circuit and various with ad agencies. Record wise  he was lead voice on Ruff N Tumble’s chart hit ‘Only You’. Then he took to the mic in his own right with the lovely single, ‘Chosen’. The cut made no. 4 in the UK soul chart and  was followed by ‘Ashanti’. Then came the dramatic ‘Three Words’… a powerful tale of domestic abuse from a male perspective.

Young James has now released a mini album, ‘Made In Jupiter’. His three singles take pride of place on the set which has been produced by Matthew Waters. Between them they offer a new perspective on contemporary British soul and R&B. Maybe it’s a tad too electro to satisfy the dyed-in-the-wool, conservative soul crowd but tunes like ‘Get Away’ and the stark ’Best Of Me’ show off James’ huge potential. He says : “I wanted my first EP to represent all elements of my sound. Made in Jupiter gives people a chance to hear the full range of what I’m capable of. It’s a record I’m proud of”  Out now!