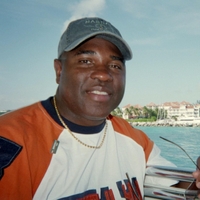 Looking for some good old fashioned, uncomplicated up-beat soul? Well then keep your eye out for ‘The Jump’ from ADOLPH THOMAS.

Adolph, who sometimes works under the name A D Thomas, is a 50 something soul boy who grew up in the era of classic funk and soul. Originally from Cincinnati, his local comtemporaries numbered  people like L A Reid and members of Midnight Star. In his teens he learned trumpet and drums – instruments he played when he joined the military –volunteering for a number of army bands.

After a long spell with Uncle Sam, Adolph settled in Fayetteville, North Carolina and worked the local circuits – gospel and secular – with his old school flavoured act. In 2011 he was diagnosed with prostate cancer, but early detection means he’s now in remission. Full of positivity, he then decided to use the experience to his advantage. Our Adolph started to write his own songs… one of which ‘The Jump’, he’s just released as a single available on all the usual download portals.

The song is a rough-hewn slab of old school soul that’s sure to get feet tapping. Adolph says: “‘The Jump’ is merely a celebration of life and the hope that everyone across the nation and the world will have an opportunity to do something good together. JUMP! A family anthem that includes the young and the old, the rich and the poor, the saved and the unsaved”.

Adolph is currently working on more songs for an album which he hopes to release early next year. He’s set to call the long player ‘My Revelation’.