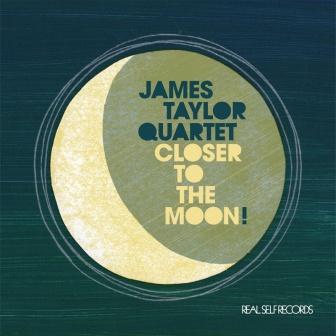 THE JAMES TAYLOR QUARTET – purveyors of funky Acid Jazz for over a quarter of a century – are all set to release their most ambitious album – ‘Closer To The Moon’. The new collection was inspired by TAYLOR’S visit to the Royal Albert Hall, where, working with long time associate, NITIN SAWHNEY, he was invited to play the famous organ. TAYLOR says, “I was given several days to acquaint myself with the organ; I had the whole Albert Hall to myself and the sound was so powerful that I began a love affair with orchestral sounds”. As a consequence, the new long player sees the organ grinder moving into classical territory whilst still retaining his trademark jazz-funk licks.

‘Closer To The Moon’ promises to be a unique listening experience… with TAYLOR even offering a version of BEETHOVEN’S Piano Sonata number 8. The album has TAYLOR’S first ever lead vocal too. He takes to the mic on the set’s lugubrious title cut.

CLOSER TO THE MOON by the JAMES TAYLOR QUARTET is released Real Self Records on May 6th.