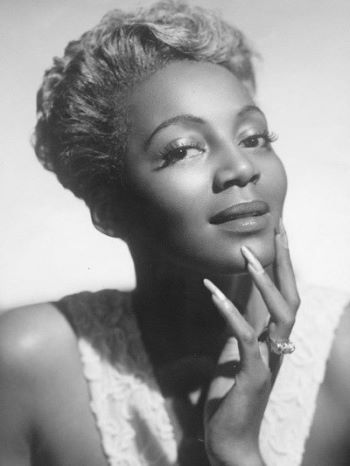 Pioneering US entertainer JOYCE BRYANT died on Sunday 20th November. She was aged 95 and in a long career she achieved fame as a singer and dancer. She worked for a number of record labels, including Okeh. A committed Christian she was also a prominent civil rights activist .

Ms Bryant was at the height of her fame in the late 40s and early 50s , when, like artists like Eartha Kitt and Lena Horne, she became something of an early African American sex symbol. She quit show business in 1955 to devote her self to working with the Seventh Day Adventist Church. Returning  to singing in the mid-60s she worked as a vocal coach and with the New York City Opera.

A close friend of Dr Martin Luther King, Joyce believed the struggle for civil rights to be the struggle for all people who believed in God, but when she confronted her own church, asking it to take a stand against discrimination, the church refused with the reasoning, “But these are of earthly matters and thus of no spiritual importance. Despite that disillusionment she continued to work as a powerful advocate for civil rights.