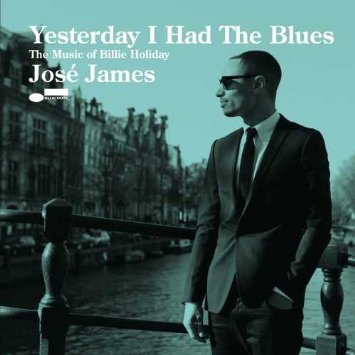 Never one to rest on his laurels, Minneapolis-born JOSÉ JAMES follows-up last year’s acclaimed Blue Note album ‘While You Were Sleeping’ – which found the singer moving into a more rock-inflected direction – with a more traditional kind of jazz offering. ‘Yesterday I Had The Blues’ is a homage to legendary jazz diva Billie Holiday to commemorate the hundred anniversary of ‘Lady Day’s birth. Helmed by Blue Note boss and uber producer, Don Was, and featuring accompaniment by pianist Jason Moran, bassist John Patitucci and drummer Eric Harland, the album comprises James’ interpretation of nine songs associated with Holiday, including the immortal ‘Good Morning Heartache,’ ‘God Bless The Child,’ and the harrowing ‘Strange Fruit.’

Says José James: “My first clear musical memory is of Billie Holiday. (Her) voice floated through our house – grand, warm, intimate and totally unique. Her work was mastery – of pain, of trauma, of faith in music and the power of transformation. I had found my teacher. Billie Holiday made me want to be a jazz singer and set me on the path that I’m walking today.”

‘YESTERDAY I HAD THE BLUES’ IS RELEASED VIA BLUE NOTE ON 30TH MARCH.