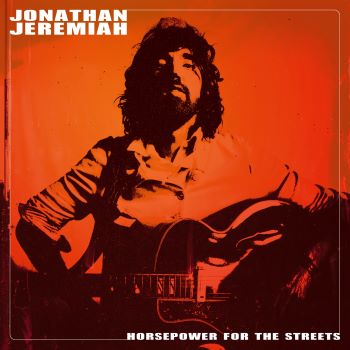 It was way back in 2009 when we first got to know London’s JONATHAN JEREMIAH. We (and plenty more soul media) enthused about his single, ‘What’s a Guy Got To Do’. That was followed in 2011 by the album  ‘A Solitary Man’. Again, critically acclaimed with many making comparison with Bill Withers and Terry Callier. The music was gentle and sonorous – full of strong melodies, sensible, thoughtful lyrics and was produced with care and love. It wasn’t classic soul but most agreed it was “soulful”. Since then a trio of albums which seemed to have evaded our radar.

The good news though is that Mr J’s just released a new album – ‘Horsepower For The Streets’, and like ‘A Solitary Man’ it’s beginning to win rave reviews. We’ve yet to be told (or work out the significance) of the LP title (we know there’s a film of that name due for release) – but its enigmatic nature is reflected in the music. Indeed the album’s title cut opens the record and sets the tone for what’s to come; like his previous work, it’s melodic, thoughtful, relaxing and, in place, provocative. The soundscape is lush – Jonathan’s blue-eyed soul voice supported by a femme chorus  and the massed strings of Amsterdam Sinfonietta. The whole album was recorded by the way  in Bethlehemkerk, a renovated monumental church in Amsterdam Noord.

The 20 piece string section is one of the album’s significant sounds – giving a cinematic lushness to proceedings  and can be heard to beautiful effect on tracks like the (almost) funky ‘The Rope’, the lovely ‘You Make Feel This Way’ (very Terry Callier)  and  the sombre, mysterious closer ‘Sirens in the Silence’  though on the album’s best ballad, the stark ‘Early Warning Sign’ the strings wait till almost the end to come in – the more impactful for that!

Jonathan Jeremiah’s ‘Horsepower For The Streets’ is out  now via Pias Records and comes recommended for those who like their music a little provocative, thoughtful and left field. Thanks to Toby Walker @ http://www.soulwalking.co.uk/ for uncovering  this one.