JONATHAN… DOING WHAT A GUY’S GOTTA DO 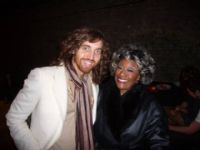 JONATHAN JEREMIAH is a new British singer/songwriter who’s about to launch his debut album – and from what we’ve heard from the sampler EP doing the rounds, he’s set to become a major player. Born in Wembley to an Anglo-Asian father and an Irish mother, his love of music began with JAMES TAYLOR and CAROLE KING, though at university his allegiances switched to singers like NICK DRAKE and JOHN MARTYN. After his studies JONATHAN travelled across America and immersed himself in soul before returning to the UK to work on his own material. His album’s taken seven years to complete and towards the end of the process his reputation in the North London music community was such that he could draft in the likes of BERNARD BUTLER (ex-SUEDE man and DUFFY collaborator), QUESTLOVE from the ROOTS and the legendary JBs to help out. The result is a delicious music that’s hard to pin down but which has soul sensitivities at its root. Listen out for the string-laden, MARVIN-GAYE-inspired, DONNY HATHAWAY-flavoured ‘What’s a Guy Got To Do’… already one of 2009’s best soul tracks.

Tags: JONATHAN... DOING WHAT A GUY'S GOTTA DO