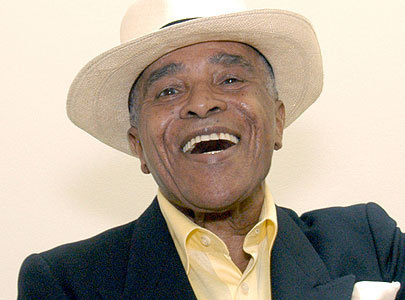 Celebrated jazz singer JON HENDRICKS died in New York on Wednesday, 22nd November. He was aged 96. His death, in a hospital, was confirmed by his daughter Aria Hendricks.

Born John Carl Hendricks in Ohio in 1921, he began singing at an early age often working with a young Art Tatum. After army demob Hendricks moved to New York, immersing himself in the city’s flourishing jazz scene.

In 1957 he joined Dave Lambert and Annie Ross to form the influential vocal trio Lambert, Hendricks and Ross whose distinctive sound won acclaim as Hendricks penned lyrics to notable jazz instrumentals – most famously Mongo Santmaria’s ‘Yeh, Yeh’. It’s said that he was inspired in this particular direction after hearing King Pleasure’s record of ‘Moody’s Mood for Love,’ based on a James Moody saxophone solo on ‘I’m In The Mood For Love’ for which singer Eddie Jefferson had written new words. Hendricks is quoted as saying, “I was mesmerized. I’d been writing rhythm-and-blues songs, mostly for Louis Jordan. But I thought ‘Moody’s Mood for Love’ was so hip. You didn’t have to stop at 32 bars. You could keep going.”

Hendricks’ lyrics used the original tune as the starting point for intricate, often humours lyrics. The sound, akin to scat, was dubbed “vocalese” and Hendricks became the best known performer in the idiom. The trio’s 1961 album ‘High Flying’ won a Grammy Award for best performance by a vocal group though some so-called “serious” jazz critics claimed their work “trivialised” classic jazz.

In 1963 the trio members began to pursue solo careers and Jon Hendricks (by now he’d dropped the H from his first name) eventually settled in England. Returning to the USA, he worked as jazz critic for the San Francisco Chronicle.

In 1974 Hendricks produced the stage show ‘Evolution of the Blues,’ in which he traced the history of African-American music in song and verse. Later he formed Jon Hendricks and Company, a vocal quartet that carried on the tradition of Lambert, Hendricks & Ross.

In 2000 Hendricks moved back to his childhood home in Toledo, Ohio and continued performing. In 2015 he joined Annie Ross to perform at New York’s Birdland.

A unique jazz talent, Jon Hendricks played a major role in popularising jazz and he was a huge influence on numerous performers – most notably Bobby McFerrin, Al Jarreau and Georgie Fame –whose biggest hit of course, was his version of ‘Yeh Yeh’.