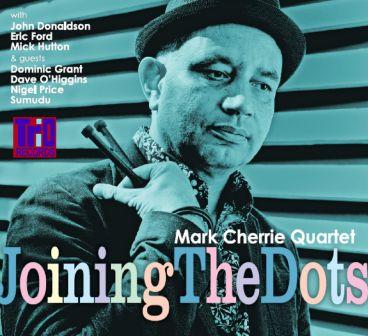 ‘Joining The Dots’ is the latest album from the MARK CHERRIE QUARTET and if you’re looking for something a little different to see you through a cold an miserable winter this might do the trick. You see Mark Cherrie leads the album on steel pans and the jazz sound he and John Donaldson (piano), Eric Ford (drums) and Mick Hutton (double bass) craft is both refreshing and innovative.

Mark’s family hailed from Trinidad and his father, Ralph was a well known pan player in the 50s and 60s. Indeed he was one of the leading lights in establishing the Notting Hill Carnival. Naturally young Mark followed the family tradition but he also (like dad) became proficient on keyboards and went on to work with people like The Drifters and Jimmy Ruffin whilst also composing TV music for series like ‘The Fresh Prince of Bel Air’ and ‘Buffy The Vampire Slayer’.

Mark (again like his father) has always believed that the steel pans are much more than novelty and have a context that is wider than a Caribbean heritage. To prove the point Mark took John, Eric and Mick into a studio and cut ‘Joining The Dots’ – a serious jazz set that will raise a few eyebrows.

The 14 tracker is a mix of covers and originals. Amongst the classic jazz covers are Mark’s versions of Herbie Hancock’s’ ‘Maiden Voyage’ and Wayne Shorter’s ‘Footprints’ while he also offers his perspective on the Police’s ‘Walking On The Moon’, the folk song ‘Scarborough Fair’ and Jimi Hendrix’s ‘Little Wing’. Hendrix is a particular hero of Mark’s – an innovator on the guitar as he is on the pans.

Amongst the five Mark Cherrie originals is a lovely laid back ‘Like Lovers Do’ which features vocals from Sumudu. The interplay between the vocal and the pans is captivating on both the extended and radio mixes.

THE MARK CHERRIE QUARTET; Joking The Dots is released on Trio Records on February 2