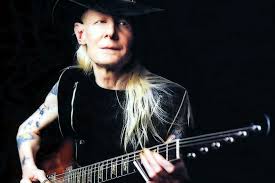 Blues guitarist Johnny Winter has died at the age of 70. He died in Zurich on Wednesday July 16th, days after playing the Lovely Days Festival in Austria.

Born in Texas in 1944, Winter began his musical career as a clarinettist before moving on to the guitar. He developed a blues-based style that was heavily influenced by Muddy Waters. The Chess blues star went on to mentor Winters and the two regularly worked together.

In 1964 Winter worked with Mike Bloomfield and subsequently won a record deal with Columbia. His 1969 LP, ‘The Progressive Blues Experiment’ was hailed as new age blues classic. The album contained a tribute to Muddy Waters along with tracks like ‘Rollin’ And Tumblin” and an energized cover of ‘Good Morning Little Schoolgirl’. Winter – instantly recognizable by his long white hair (he was born an albino) – went on to work with Jimi Hendrix and Janis Joplin. For a time he also worked with his brother, Edgar, but his career stuttered from time to time as he struggled with addiction problems.

The guitarist was due to release a new album in September and he recently commented that he just wanted to be remembered as “a good blues musician but you don’t want to sound like anybody else. I hope I’ve done that. I don’t think anybody else plays like me”.