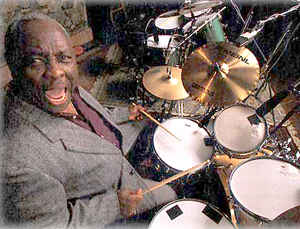 US soul sites are reporting the death at age 79 of drummer JOHN “JABO” STARKS. Jabo died at his home in Mobile, Alabama after a struggle with leukaemia.

He will always be remembered as the drummer on numerous James Brown recordings, though his career begun when he played for blues stars likes BB King. Starks joined the Godfather’s entourage in the mid 60s and it’s his drumming on era-defining tunes like ‘Licking Stick’, ‘Sex Machine’, ‘Super Bad’, ‘Soul Power’, ‘Hot Pants’, ‘Make It Funky’, The Payback’ and many, many more. After leaving Brown, Starks teamed up with another JB alumnus Clyde Stubblefield in the Funkmasters.

Jabo Starks is survived by his wife Naomi, and his two children.