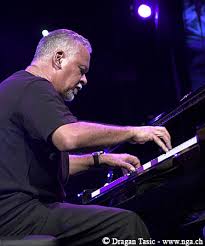 JOE SAMPLE – legendary and masterful keyboardist – died on Friday 12th September. He was 75. His family announced the sad news with the following message: “Yolanda Sample and son Nicklas would like to thank all of you, his fans and friends, for your prayers and support during this trying time. Please know that Joe was aware and very appreciative of all of your prayers, comments, letters/cards and well wishes.”

Joe (Joseph Leslie) Sample was born in Houston in 1939 and he began playing the piano when he was five years old. At Wheatley High School he teamed up with saxophonist Wilton Felder and drummer “Stix” Hooper, and formed a group called the Swingsters. Other players eventually joined the group including trombonist Wayne Henderson and the band changed its name to the Modern Jazz Sextet and eventually the Jazz Crusaders, a tribute to Art Blakey’s Jazz Messengers.

In 1960 the group decamped to Los Angeles and, now a quartet, made their first record -‘Freedom Sounds’ in 1961. The band recorded prolifically but the individual members also pursued semi-solo careers. In 1969 Joe Sample made his first recording under his own name, ‘Fancy Dance ‘– a jazz trio album.

By the 70s the band had trimmed their name to The Crusaders and their music veered from straight jazz to a more accessible soul-based, groove sound. At the same time, Sample became an in-demand Los Angeles session player and worked on records by people like Joni Mitchell, Marvin Gaye, Tina Turner, B. B. King, Joe Cocker, Minnie Riperton and Anita Baker.

Sample was also known as a pioneer of the electric keyboard. He began to use the electric piano in the Jazz Crusaders but his best known recording with the innovative instrument is possibly ‘Street Life’. Other acclaimed Crusaders’ albums featuring Sample’s inspired and innovative playing include ‘Rhapsody And Blues’ and ‘Those Southern Knights’. The Crusaders split up in 1987 (though they would sporadically reconvene) and Sample issued numerous acclaimed solo albums –amongst them ‘Sample This’, ‘The Hunter’, ‘The Song Lives On’, ‘The Pecan Tree’ (which featured the sublime Howard Hewett vocalised ‘In A Heartbeat’) and ‘Feeling Good’ (a collaboration with long time Crusaders’ associate, Randy Crawford).

Joe Sample relocated to Houston in 2001 and was named artist-in-residence at Texas Southern University’s Jazz Studies programme. Until recently, he continued to tour extensively in Europe and performed with two new groups, the Creole Joe Zydeco Band and the Joe Sample Select Orchestra. Most recently, Sample was actively working on original lyrics and music with Jonathan Brooks for a musical theatrical work, ‘Quadroon’, which just experienced a successful reading this summer in his hometown of Houston.

Joe Sample is survived by his wife, Yolanda, and his son, bassist Nicklas Sample.