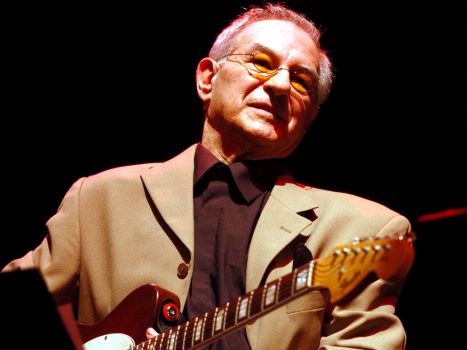 Acclaimed Motown guitarist and original Funk Brother, JOE MESSINA died on Monday 4th April. He died at the Northville, Michigan home of his son, Joel Messina, succumbing to a 12-year kidney disease. He was 93.

Born in Detroit in 1928, Messina learned to play guitar in his teens and his first gigs were with ABC TV studio band where he supported a who’s who of jazz greats imbuing in him a love for that genre.

In 1958 Berry Gordy brought him to Motown and alongside the other Funk Brothers (like Messina, most recruited from the Detroit jazz scene) he played on countless tracks for the whole Motown roster – most famously his guitar work graced ‘Dancing In The Street’, ‘I Can’t Help Myself’ and ‘Your Precious Love’. Messina was one of three regular guitarists to work in the famous Motown snake pit studio. The other two were Eddie Willis and Robert White (pictured with Joe, below). Like the other Funk Brothers their work went largely uncredited.

When Gordy took the Motown operation to Los Angeles, Joe refused to go. Remaining in Detroit, he stopped playing professionally and concentrated on his growing carwash business … he bought his first car wash in 1968! Hi son, Joel said: “He didn’t want to give up what he had going in Detroit. But he also knew they were looking for a more current (musical) feel out in California, and he realized it would have been short-lived.”

In the 90s he returned to music releasing an album titled ‘Messina Madness’. In 2004 Messina  along with 12 other Motown session players – the “Funk Brothers” –  were honoured with a Grammy lifetime achievement award and, later in 2013, with a star on the Hollywood Walk of Fame.

Before his Monday passing, Messina was among the last surviving players from the Funk Brothers’ core early ensemble. The group’s unheralded Motown contributions were brought to wider notice with the acclaimed 2002 documentary ‘Standing in the Shadows of Motown’ in which Messina featured prominently.

In addition to his son, Joel, Messina is survived by daughter, Janice Coppa; four grandchildren, and five great-grandchildren. His wife, Josie Messina, died in 2009.