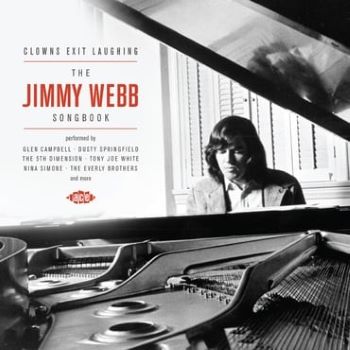 Multi-garlanded song writer JIMMY WEBB is the latest tunesmith to be given an album tribute from Ace Records. Over the last few years the doyen of reissue labels has issued a number of albums paying homage to some of the greatest writers of popular music… so why have they taken so long to get round to Webb? Well, maybe it’s because he’s penned so many classics, that it was hard to select the 24 tracks that made the final cut!

But the wait has been worth it. This is just a lovely album and ‘Clowns Exit Laughing – The Jimmy Webb Songbook’  – begins with possibly Webb’s most famous song in its most well-known version… ‘By The Time I Get To Phoenix’ from Glen Campbell. However for the rest of the 24 tracker expect the unexpected. Sure, all of Webb’s iconic songs are included but offered here in versions that won’t be that familiar – except to Jimmy Webb anoraks.

So for instance we get ‘Galveston’ from Hawaiian entertainer Don Ho (this, it seems, was the first recorded version), ‘MacArthur Park’ from country star Waylon Jennings supported by the Kimberleys and ‘Wichita Lineman’ from Tony Joe White.

There is plenty of soul presence on the album. Enjoy Dionne Warwick with her take on ‘Up Up And Away’, Chuck Jackson with ‘Honey Come Back’, the Supremes on ‘I Keep It Hid’, the 5th Dimension with the ultra-poignant ‘Rosecrans Boulevard’  and Dee Dee Warwick’s take on ‘If This Was The Last Song’ which, aptly, closes the collection. And to prove that Webb was taken seriously by “serious” artists, there’s Nina Simone’s’ heartfelt take on ‘Do What You Gotta Do’ – which, for soul quotient, blows all the other versions out of the water!

CLOWNS EXIT LAUGHING’ The JIMMY WEBB SONGBOOK is out  now via ACE RECORDS.