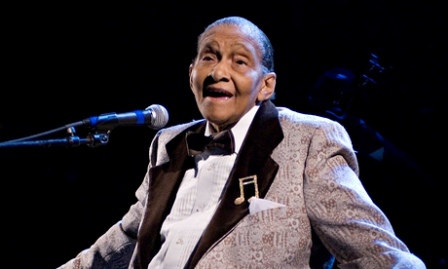 US jazz singer JIMMY SCOTT died on Thursday June 12th in Las Vegas. The diminutive, distinctly-voiced contralto was 88. Scott’s wife (his fifth), Jeanie, said her husband died in his sleep at his Las Vegas home on Thursday. He had battled health problems stemming from a genetic hormone deficiency and had been under the care of a home nurse. Jeanie added that her husband stopped touring two years ago but continued recording.

Jimmy Scott was born in Cleveland, Ohio in 1925, the third in a family of ten. As a child Jimmy got his first singing experience at the family piano, and later, in a church choir. At thirteen, he was orphaned when his mother was killed by a drunk driver.

Scott had the rare genetic condition Kallmann’s Syndrome, which meant he never reached puberty and his voice did not deepen but that served to make his voice unique and as “Little Jimmy Scott” he won his first major gig in the Lionel Hampton Band, singing lead on the late 1940s hit ‘Everybody’s Somebody’s Fool’. As was often the case with Big Band records, the singer wasn’t credited but things got worse when Jimmy’s vocal on Charlie Parker’s ‘Embraceable You’ was credited to “Chubby Newsome”.

Hassles between record companies (notably Tangerine and King) meant that attempts at launching a solo career in the 60s were hampered and by the end of that decade Jimmy Scott was back in Cleveland working variously as a hospital porter, clerk and lift operator.

It wasn’t till 1991 that Scott made his “comeback”. After singing at the funeral of his old friend and famed song writer Doc Pomus, he was discovered by a new generation of music fans. These included Lou Reed (who got him singing bvs) and David Lynch (who gave him a part in his cult TV series ‘Twin Peaks’). Jimmy was subsequently signed to Sire Records where he debuted with the Grammy-nominated, Tony LiPuma-produced ‘All The way’. More successful LPs followed including ‘Holding Back The Years’ – a collection of rock and pop standards and in the wake of this success his old labels were quick to reissue his earlier work.

Jimmy sang at President Dwight Eisenhower’s (1953) and President Bill Clinton’s (1993) inaugurations, where he sang the same song, ‘Why Was I Born?’ and in his later years he was showered with honours and awards. In short Jimmy Scott was a National Treasure….described by Madonna as “the only singer who makes me cry”.