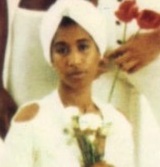 Soul singer JESSICA CLEAVES –best known as one of the lead voices in the Friends of Distinction – died on Friday 2nd May in Los Angeles. She was 65.

Born in Los Angeles in 1948, Jessica was one the original members of the Friends of Distinction along with Barbara Jean Love, Harry Elston and Floyd Butler. Elston and Butler had worked together in the Hi-Fi’s – back up vocalists in Ray Charles’ band – but in 1966 they wanted to work in their own right. Recruiting Cleaves and Love, they formed the Friends Of Distinction and worked the Los Angeles circuit and soon came to the attention of ex-pro football legend Jim Brown. Brown became their manager and soon got them a deal with RCA.

In 1969 they scored with their first single- the still magnificent ‘Grazing In The Grass’. The tune, of course, had been an instrumental hit for South African trumpeter Hugh Masekela, but with the addition of Elston’s words, the new vocal version became a huge hit and remains a personification of what some people call “Sunshine Soul”. The soulful follow up. ‘Going In Circles’ became an even bigger hit (check out Luther Vandross’ cover too). Three more hits followed after which Cleaves and Love left the group.

Jessica soon joined an upcoming Chicago band called Earth Wind & Fire, and recorded two albums, (‘Last Days and Time’ and ‘Head to the Sky’) with them. But by the time EWF broke through Jessica Cleaves had moved on to work with George Clinton and various Parliament and Funkadelic offshoots.

In the 80s Jessica fell off the music radar though we’re told that her god son, filmmaker Armand Araujo, begun filming her life story ‘Jessica Cleaves, My Friends of Distinction’ in 2013. There is, though, currently no news on the progress of the movie. Nor is there any news about the circumstances of Jessica’s passing. The great music she made as part of the Friends Of Distinction will forever remain he legacy.