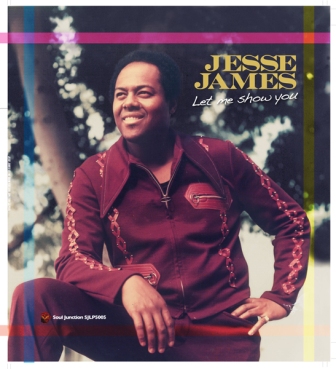 The small but perfectly formed Soul Junction Records don’t do too many releases, but the discs they do put out are all high quality, collectable soul releases. Witness their latest long player – ‘Let Me Show You’ from Arkansas’s JESSE JAMES. JAMES is well known to soul connoisseurs via his 1975 outing ‘If You Want A Love Affair’. Since then the collectors have been treated to his hard-to-find work via a Soul Junction 45 – ‘I Gave You Love With An A Plus’ (originally released on Gunsmoke Records) and the same label album, ‘Get In Touch With Me’.

Soul Junction have now unearthed more JAMES material and assembled a new LP on the gritty soul man. The ten track long player (vinyl only by the way) is called ‘Let Me Show You The Way’ and it’s an endearing mix of vaguely familiar material and unissued cuts.

The unissued cuts include a late 60s mid tempo groove ‘I Don’t Want An Undivided Love’, the disco-influenced ‘I’m In Love With Loving You’ and a cover of the ever-lovely ‘Just As Long As We’re In Love’ (a song forever associated with THE DELLS and TERRY CALLIER).

Other goodies include both sides of a JAMES single for Moonlite Hope Music – ‘I Got The Feeling’ and ‘Let Me Show You’ … and that last one is real classy mid-tempo soul roller – no wonder Soul Junction have used it as the album’s title. Add to those another opportunity to enjoy the man’s 1970 underground hit ‘I Feel Your Love Changing’ and a long edit of the single ‘I Gave You Love With An A Plus’ and you have a proper soul album that will please right across the collectors’ spectrum. Find out more @ www.souljunctionrecords.co.uk