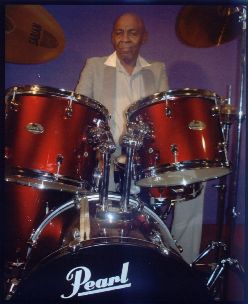 His pro career started when he was just 16, playing drums for Wilson Pickett but Teasley’s probably best remembered for joining Jr. Walker and the All Stars in the late 60s, just prior to Walker’s no. 1 hit ‘What Does It Take’. The drummer then went on to play sessions for some of soul’s top names including Ike and Tina Turner, Smokey Robinson, and Al Green. Jerome was the drummer on Green’s debut album, ‘Back Up Train’. Jazz wise, Teasley also worked with Sonny Stitt and he also recorded with Jimi Hendrix.

In the 80s he moved to Phoenix where he continued to play sessions and work live. In 1993 Teasley was inducted into the Motown Hall of Fame.