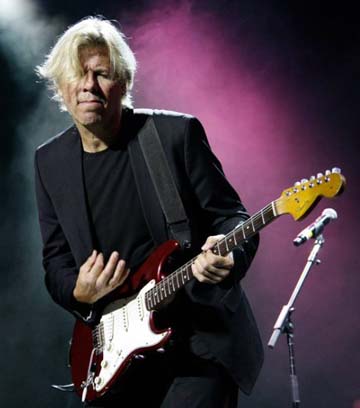 Cross-genre guitarist JEFF GOLUB died on Thursday, January 1st. He was 59 and though few details are available, it seems that Golub had been suffering from an incurable brain disorder known as Progressive Supranuclear Palsy for some time.

Jeff Golub was born in Copley, Ohio, in 1955 and took up the guitar in his early teens, citing his inspiration as C&W, Brit beat bands and the blues! After Berklee Music College he moved to New York and began working with rock guitarist Billy Squier. He recorded seven albums with Squier before becoming an in-demand session player listing work with people like Tina Turner, Bill Evans and Vanessa Williams in his CV.

He released his first solo album (‘Unspoken Words’) in 1988 – the same year that he teamed up with Rod Stewart. Golub remained with Stewart’s band till 1995 after which he re-focused on his own career forming the band, Avenue Blue which soon won acclaim in the then emerging smooth jazz area. Amongst the best of Avenue Blue’s albums are ‘Dangerous Curves’ (2003) and ‘Grand Central’ (2007). Golub then went on to record under his own name – using his colleagues from the smooth jazz world as support

In 2011 the guitarist lost his eyesight after the collapse of an optic nerve. He continued to wok but the following year in a bizarre accident he fell onto the New York subway track. He was saved by the quick action of fellow passengers but recalled the incident in his last long player, ‘Train Keep A Rolling’ (2013).

Jeff is survived by his wife Audrey, sons, Chris and Matthew, mother Pearl Golub and several siblings. On Jan. 21, a concert at B.B. King’s Blues Club & Grill in New York City will help raise funds for his family and it will feature many of his contemporary jazz peers and friends.