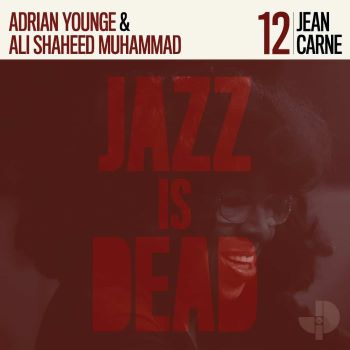 JEAN CARNE (with or without that ”E”) is a soul legend and really needs no introduction here! The savvy soul crowd know and love the lady chiefly for her work at Philadelphia International which yielded a plethora of timeless classics. However serious fans will know that Jean began her musical career (after the usual gospel apprenticeship) in jazz. Her first four albums were as vocalist with her then husband, Doug’s, jazz fusion band.

And for her latest project Ms C is returning to those jazz roots. Here new collection ‘JID012’ is a collaboration with Adrian Younge and Ali Shaheed Muhammad for the Jazz Is Dead record label  and (as that label name suggests) the seven tracker takes her away from the sounds of PIR and  right back to her jazz heritage.

The album was flagged up a few months back with the single ‘Black Rainbows’ which we described then as “more a meditation that a “song” in the traditional sense”. The Jazz Is Dead team called it “a keyboard fantasy/percussion-driven number, which gives Carne’s voice enough space to showcase her incredible talents. The title and refrain conjure memories of Sun Ra’s Afrofuturism with graceful awe.” And those futuristic, meditative, experimental vibes run through the veins of all the music on the concise 7 tracker.

The songs explore the possibilities and power of love – of self, of community, of powers from above while the arrangements push all the boundaries. Bringing the unity to the album is the power of Ms C’s distinct, other-worldly, acrobatic voice.

Amongst the tracks are ‘Summertime’ – an  experimental jazz  take on the atmospherics of summer in the city,  the cosmic journey that is ‘My Mystic Life’ and the closing focus cut, ‘Black Love’ – a scatty, incendiary  tribute to the power of community.