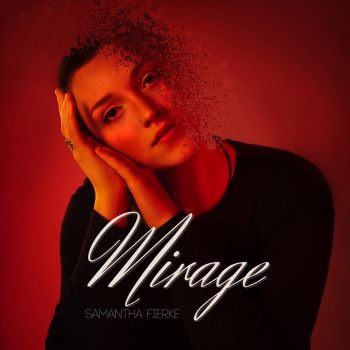 Young US jazz vocalist and songwriter  SAMANTHA FIERKE made some noise with the release of her  five-song EP of standards in 2018 titled ‘Sam’. As momentum was building after the release, the pandemic and subsequent lockdowns kicked in but a determined Ms Fierke began work on a full album and that set, ‘Mirage’ finally wins release on November 18th. The album was produced by drummer/percussionist  Loyd Warden and the other musicians are bassist Mickey Jamieson and  keyboardist Samuel Luetkemeyer.

‘Mirage’ is a concise 8 tracker and the songs deal with all sorts of issues, none more issue-packed than the multi-faceted title track. After a sombre start, it changes direction as it deals with the contrasting feelings of hope and despair amidst the chaos and turmoil that has gripped the US for the last several  years. On the cut, the singer, though a relative newcomer, shows her mastery of the art of scat vocals. Clearly she’s comfortable with the format. The album actually opens with a masterclass in scat as the singer glides her way through a rhythmic ‘Kick It Loose’ which, we’re told, is Samantha’s tribute to Chick Corea, She says:  “Chick died as I was still writing it and immediately, I knew it was for him. It is a song for the musician’s soul, to remind us that we are not simply a commodity to be bought and sold. Music is not between audience and performer, but among a communal group”.

Elsewhere, the tale of lost innocence  ‘I Remember Butterflies’ is whimsical while ‘Shower Song’ is more experimental. Not many jazz tracks feature the sounds of water droplets; here augmenting the percussion. Each of the other songs add variety both in sound and sentiment; all the more remarkable, maybe,  given the  fact that Samantha was diagnosed with autism at the start of the pandemic. Sammatha again: “My autism was harder to identify at first due to my ADHD, which can sometimes make the behaviours look different via opposite extremes competing for exposure. When I received my diagnosis, all the sudden my life and all my experiences made sense. Putting the pieces together was extremely liberating in some ways, but it also revealed a lot of deep pain and heartache that I’ve experienced due to being autistic. And it hurt to realize that if I had supports in place all along, I may have lived a very different life and avoided a lot of trauma.” Thus, the 8 tracks of ‘Mirage’ can be seen as journey of self-discovery – a journey that ultimately ends with a mature jazz album  which has already received Grammy consideration in 5 categories.