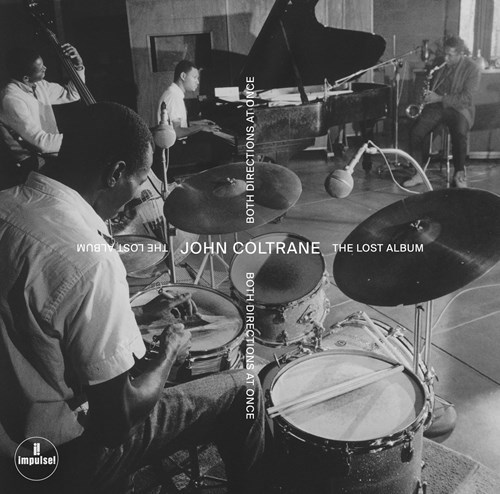 On June 29th, Impulse! Records will release a lost John Coltrane album which was recorded by the legendary saxophonist with his classic quartet (McCoy Tyner, Jimmy Garrison, and Elvin Jones) in 1963. It’s being released under the title ‘Both Directions At Once: The Lost Album’ and features seven songs recorded by the quartet with producer Bob Thiele at the helm for Impulse! Records on Wednesday March 6th 1963 at engineer Rudy Van Gelder’s famed studio in New Jersey.

The finding of the forgotten album, which was discovered on a well-preserved 1/4-inch reference tape that Coltrane left in the possession of his first wife Naima’s family, is being likened by Coltrane fans and scholars alike to stumbling upon the Holy Grail. Even more astounding, perhaps, is that the album contains three, previously unknown, Coltrane compositions, two of which are untitled (with Trane playing soprano sax) and the other called ‘Slow Blues.’  Another original, ‘One Up, One Down,’ has only previously been known from a bootlegged live performance. Also present on the album is a radically different version of one of Coltrane’s Impulse! era signature pieces,  ‘Impressions,’ which is rendered in trio form, minus McCoy Tyner’s piano. Tyner also lays out on a cover of the Nat King Cole-associated, ‘Nature Boy’ but returns for ‘Vilia,’ a swinging groove that is based on a melody from Franz Lehar’s 19th century operetta, ‘The Merry Widow,’ and which was first jazzed-up by swing era clarinettist, Benny Goodman.

As well as standard LP and CD versions of the album, there’s also a deluxe format, which is expanded to a 2-CD/2-LP set featuring seven additional tracks, all alternate takes from the sessions.

‘Both Directions At Once: The Lost Album’ will be available via Impulse! Records on June 29th.