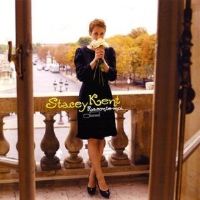 With Summer beckoning, there’s lots of fresh new jazz about… here’s some of the more interesting items. First up is an unusual set from vocalist-supreme , STACEY KENT. The album – ‘Raconte-moi’ – is unusual because it’s a collection of French songs old and new. KENT’S grandfather was French and she’s hugely popular there. She has recorded in French before but now we have a whole LP that crosses the divide between French chanson and jazz. Label is Blue Note. As quirky is a new 12 tracker from London-based CHRISTINE TOBIN and LIAM NOTE. On ‘Tapestry Unravelled’ they elegantly and cleverly reinterpret the whole of CAROLE KING’S iconic ‘Tapestry’ album . It’s stark and unadorned – allowing the beauty of the music to speak for itself. Label for that one is Trail Belle Records. Different again is trumpeter ERIK TRUFFAZ’S ‘Rendezvous’ album on which he collaborates with SIMPLE SPIRIT vocalist SLY JOHNSON. It’s an epic three CD set and covers a huge range from the BEATLES to World Music. Blue Note is the label. More straightforward, maybe, but with its own set of challenges is DAVID BENOIT’S ‘Earthglow’ . On the set of 11 originals , the piano man was inspired by pictures of the earth taken from space. Guest players include RICK BRAUN, JEFF KASHIWA and PAT KELLY and the label is Heads Up. Reviews on www.soulandjazzandfunk.com soon…..