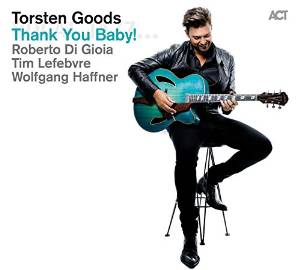 ACT RECORDS have just released two fine jazz guitar albums that fans of the genre could do worse than investigate.

First up there’s ‘Thank You Baby’ from Germany’s TORSTEN GOODS. His new 13 tracker is called ‘Thank You Baby’ and it’s a collection of what Goods calls “Spirituals, blues and roots music”. The kind of music that was familiar to me as a young lad!”

Amongst the selected tunes are covers of two Oscar Brown Jr songs – ‘Work Song’ and ‘Brother Where Are You’ , a great version of Marvin Gaye’s ‘How Sweet It Is’, Ray Charles’s ‘Hallelujah I Love Her So’ and a take on ‘Everything Must Change’ – maybe most famously recorded by George Benson. And that’s no coincidence since Torsten’s guitar sound has been regularly compared to Benson’s. Like George, Torsten also sings but though he “does scat” his vocals are very different… a touch of James Taylor about them, I’d say.

Act’s second new release is a rather different affair. It’s ‘The String Project – Live In Brussels’ from Belgian guitarist PHILIP CATHERINE. As the title says the 12 tracker was recorded live at the Brussels Jazz festival in January this year and (again obvious) the album features the string section of Orchestre Royal De Chambre de Wallonie. The tunes are all originals and the overall sound is a melding of jazz and classical with the guitar parts being part Earl Klugh and part Larry Corryell.