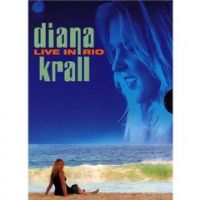 DIANA KRALL has a new DVD out to coincide with her critically acclaimed album, ‘Quiet Nights’ (read the review at www.soulandjazzandfunk.com). It’s called ‘Live In Rio’ and is released by Eagle Vision. Many of the songs from ‘Quiet Nights’ are featured along with other favourites from the Krall canon. The Canadian singer/pianist is accompanied by bassist, John Clayton, drummer Jeff Hamilton and guitarist Anthony Wilson with the legendary Paulinho da Costa providing percussion. Claus Ogerman’s original album arrangements are faithfully reproduced by the Rio De Janeiro Orchestra under the baton of conductor Ruria Duprat. Krall is set to play live in the UK in September.
Talking of jazz DVDs, the recently reformed RETURN TO FOREVER follow up their live album ‘Returns’ with a DVD of the same name. It captures the fusion supergroup led by Chick Corea at last year’s Montreux Jazz Festival and includes performances of the RTF classics ‘The Romantic Warrior,’ ‘Sorceress’ and ‘Hymn Of The Seventh Galaxy.’ It’s released by Eagle Vision.
Another ’70s jazz-fusion giant, guitarist, JOHN McLAUGHLIN, has a new DVD out called ‘Live @ Belgrade’ released by Mediastarz Monaco. The former Miles Davis sideman is caught performing in the Serbian capital with his group The Fourth Dimension (Gary Husband on keyboards, Mark Mondesir on drums and Dominique di Piazza on bass).