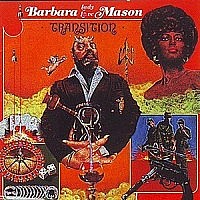 Putney’s finest, Soul Brother Records, have just released some essential titles for soul and jazz collectors. For soul fans, a couple of rare BARBARA MASON Buddah albums, 1974’s  ‘Transition‘ and 1975’s ‘Love’s The Thing‘ – which have not been on CD for two decades when they were first issued in Japan in the 1990s – receive a welcome reissue. The former was recorded in Philadelphia with arrangements from Norman Harris, Richie Rome and Bobby Eli and contains the classic ‘World In A Crisis’ while the latter album was cut in Detroit and helmed by Don Davis.

Those interested in spiritual jazz will rejoice at Soul Brother’s decision to release five albums that former Miles Davis saxophonist CARLOS GARNETT cut for the Muse label in the ’70s. Just out are ‘Black Love‘ (featuring vocalist Dee Dee Bridgewater) and ‘Journey To Enlightenment,’ both of which were originally released in 1974. The remaining three Garnett titles will follow later in the year.

Also reissued by the London-based UK specialist indie label is ‘Soul Village,’ a stunning jazz-funk collection by former bebop pianist WALTER BISHOP JR. Released by Muse in 1977 – when Bishop was fifty-years-old – it makes its CD debut.

For more info go to: http://www.soulbrother.com/