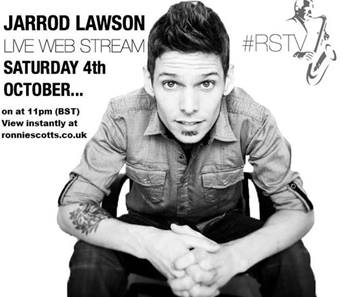 Highly-touted, latest “soul sensation”, JARROD LAWSON is all set to make his UK live debut at Ronnie Scott’s, Soho, this Saturday – 4th October. The show is already sold out (hardly surprising considering the hype around Jarrod) so the club and his UK label, Dome, have decided to stream the show live; so , Lawson’s full performance on Saturday 4th October will be beamed to a global audience.

For his live show, Jarrod will play music from his self-titled debut album, a combination of jazz, funk, gospel-blues and soul flavours. Our reviews section has a full review.

The stream comes via a state-of-the art multi camera AV set-up broadcast from its own recording studio. The club’s AV team mix the audio/visual stream live, broadcasting in-the-moment vivid high definition images onto screens and into home across the globe.