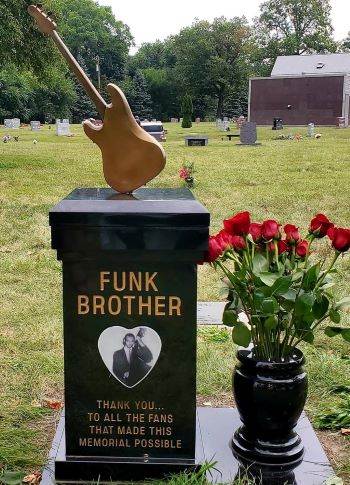 Legendary bassist JAMES JAMERSON died in 1983 and for various reasons his grave in Detroit’s Woodlawn Cemetery was marked by a simple faceplate.

Now almost forty years later his resting place had been honoured with a fitting headstone tribute.

On Friday, 28th August, family members and friends gathered to unveil a new headstone – a striking black-marble block with photos of the musician and the inscription “Funk Brother,” topped by a bronze sculpture of his famous Fender Precision bass.

His widow, Annie Jamerson “It’s something I had wanted for years. I’m just happy it’s finally happened.” The effort to raise funds for the headstone was led by Anthony McKnight, a cousin of the late bass player. He launched the campaign when a Michigan friend and Motown fan questioned the humble state of Jamerson’s gravesite.

McKnight enlisted Los Angeles sculptor Nigel Binns to create the bronze bass while the actual design was conceived by Claire Monroe a onetime worked at Woodlawn who knew that Jamerson’s grave was something of a tourist spot – alongside the greaves of other musicians buried in the cemetery, Aretha, Levi Stubbs and David Ruffin amongst them. Woodlawn is also the resting place of civil rights activist, Rosa Parks.

McKnight said Friday’s headstone unveiling is one of several Jamerson-related tributes they’ve embarked on: They’re working to honour the bassist at the Smithsonian Institution and to get him into the South Carolina Hall of Fame, based in Myrtle Beach.