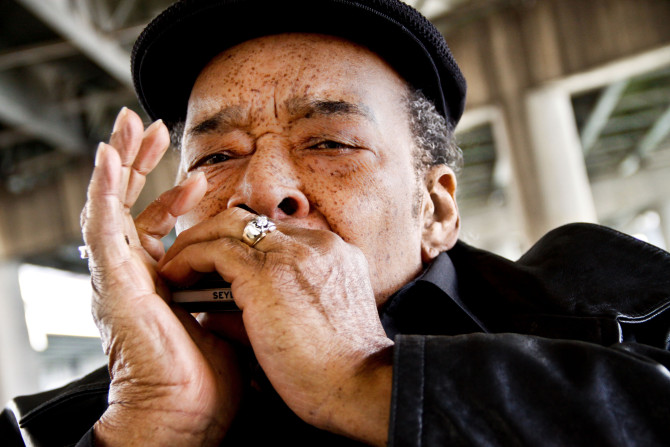 Blues harmonica player, JAMES COTTON died yesterday, Thursday 17th March. He was 81 and passed away at David’s Medical Centre in Austin, Texas. A spokesperson gave cause of death as pneumonia.

James Henry Cotton was born on a cotton plantation in 1935 in Tunica, Mississippi, U.S.A. and as a young boy taught himself harmonica. Hooking up first with Sonny Boy Williamson II, then Howlin’ Wolf, James signed for Sun Records in 1953, and debuted with a single called ‘Straighten up Baby’. Cotton then joined Muddy Waters’ band where he stayed till 1966, subsequently forming his own group… the James Cotton Blues Band.

From then he worked solidly – both with his own group and as a guest player with countless artists whose own music had its roots in the blues… people like the Rolling Stones, Eric Clapton (pictured with Cotton, below), Led Zeppelin, Janis Joplin, even the Grateful Dead.

In 1996 James Cotton won his first Grammy which sat alongside his six Living Blues Awards and 10 Blues Music Awards. A tribute concert was held in his honour at the New York Lincoln Centre in 2010 and in 2015 the Montreal International Jazz Festival gave him its B.B. King Award for contributions to the blues.

Cotton, nicknamed “Mr Superharp”, said in a 2013 interview; “I guess I was born with the blues, and I don’t know nothing else but the blues.” He is survived by wife Jacklyn, daughters Teresa and Marshall Ann, son James, and grandchildren and great-grandchildren.