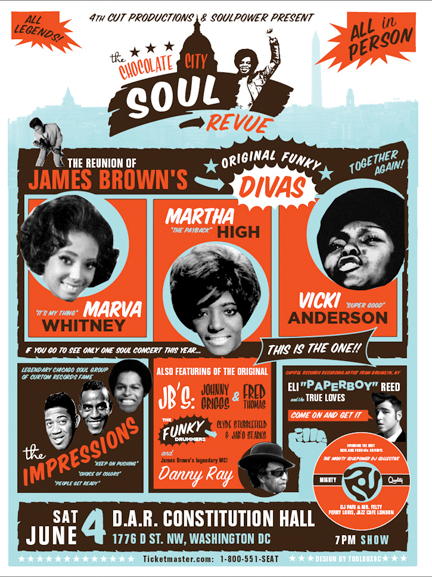 A spectacular soul music event is due to be held in at Constitution Hall in Washington DC on Saturday 4th June 2011. It’s called the Chocolate City Soul Revue and features three of James Brown’s funky divas – MARVA WHITNEY, MARVA HIGH and VICKI ANDERSON. But that’s not all. Legendary soul group, THE IMPRESSIONS are also on the bill alongside soul newcomer, ELI ‘PAPERBOY’ REED while other participants include former JB’s members CLYDE STUBBLEFIELD, JABO STARKS, JOHNNY GRIGGS, and FRED THOMAS. The event is MC’d by James Brown’s former right hand man, Mr Cape himself, DANNY RAY. It should be quite a show. The event is also being filmed for a DVD.